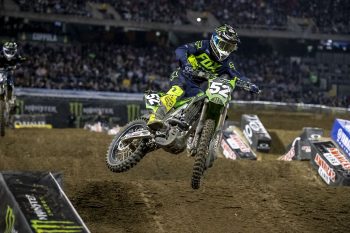 Forkner was extremely close to getting his third win of the season in Oakland, igniting a fire to make the most of the final west coast race until the end of March. McAdoo had a great first race back, having to overcome issues but walking away positive for this weekend.

Unlike last year, there is currently no rain in the forecast for San Diego. The track inside Petco Park is notoriously tight and technical, hoping to play to some advantages of Forkner and McAdoo. With five races remaining for the Western Regional 250SX class, Forkner sits just 10 points out of the lead.

“Whether we’ve had rain or clear skies, we’ve always liked racing in San Diego. It’s the last chance for the west coast guys to prove themselves before the long break. I know Austin is capable and Cameron showed good speed in his first race back. We’re looking for a good weekend out of both riders.” – Mitch Payton, Team Owner