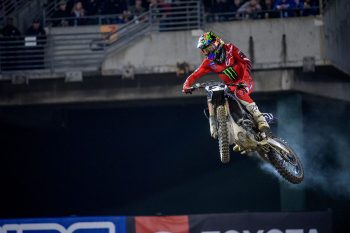 Barcia was in a transfer position when he ran into technical troubles that forced him out, prompting a rushed motor swap prior to the LCQ in which he won.

Despite those difficulties causing Barcia to select a poor gate pick for the main event, he managed to work his way through to sixth and salvage an impressive haul of points on Saturday night.

“Today in Oakland, it was a difficult and challenging day for the Monster Energy Yamaha Factory Racing Team,” explained Perry. “In the Heat race Justin had a mechanical that eliminated him from a qualifying position, but the team really came together like a fine oiled machine and got the engine changed in time for the LCQ.

“Justin started towards the front, quickly got into the lead and won the LCQ. However, that put him on the outside gate pick in the main event and an outside position on the start was definitely a disadvantage and put us in the back.

“Justin rode strong all moto long. He came from outside the top 15 to finish sixth and, maybe with a couple more laps he would’ve been able to close in to round out the top five – he put in a great ride. It was a great team effort all around with the engine swap.”