Season-best in Oakland a sign of progression for Hill 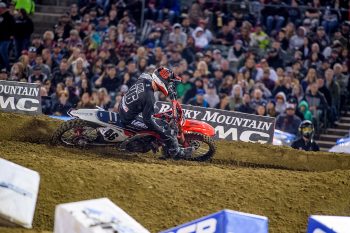 Picking up a heat race win and his first top 10 of the season came as a confidence-inspiring ride for Justin Hill in Oakland during round five of Monster Energy Supercross.

Hill scored a runaway win in his 450SX heat and then ran as high as sixth position in the main event, before mistakes cost him and he crossed the line in eighth.

“This weekend was much better than the one before, that’s for sure,” Hill said. “I don’t know what it is about Oakland, but I always feel good here. I was stoked to get the heat race win and felt really good.

“Tonight I should’ve been top five. I had a really good pace right off the get-go and most of the first half, but I struggled behind Zach [Osborne] – I stabbed at him a few times but didn’t set up my passes correctly.

“I tightened up after that, made some critical mistakes, and [Justin] Barcia and [Dean] Wilson got by me. I’m happy with my progress and I feel like I am a better rider and man than I was a week ago.”

The Smartop MotoConcepts Bullfrog Spas Honda rider is ranked 11th in the standings ahead of San Diego this Saturday night, consistent throughout the opening five rounds and landing his best result in Oakland.