Roczen cleared of serious injury ahead of San Diego Supercross

Premier class points leader completing therapy in the lead up to round six. 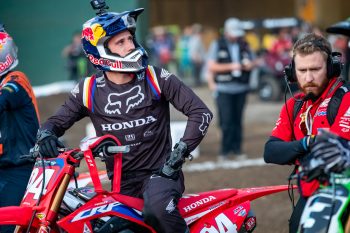 Red plate holder Ken Roczen has been cleared of a serious foot injury ahead of San Diego’s sixth round of Monster Energy Supercross this weekend.

The Team Honda HRC rider suffered an impact to his right foot after reigning champion Cooper Webb (Red Bull KTM Factory Racing) made contact with him at the final turn in Oakland for second position, leaving the German ace hobbling from his CRF450R after crossing the chequered flag.

The number 94 underwent scans earlier this week, where it was determined no serious damage was sustained in the incident despite experiencing ongoing swelling and pain.

“Team Honda HRC’s Ken Roczen is ready to rock for San Diego,” read a statement for Honda Racing. “He had his right foot checked out on Monday following the Oakland SX and was given the green light that there was no serious damage. He’s been doing therapy throughout the week to alleviate swelling and pain. He rode today and was feeling great.”