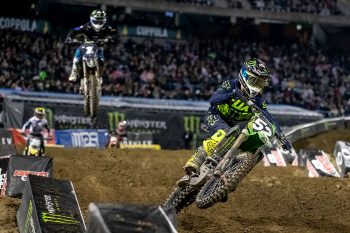 An assertive pass on Austin Forkner from Dylan Ferrandis for the 250SX lead at Oakland was nothing to be concerned about, the Monster Energy Pro Circuit Kawasaki rider stated post-race.

Still on probation from his severe contact with Christian Craig at Anaheim 2, new 250SX West leader Ferrandis was once again aggressive in making a move by Forkner on the weekend.

But despite the latter going off-track, defending champion Ferrandis has been cleared of any wrongdoing and Forkner – whose race was affected by lapped riders in the main event – said afterwards that he would have done the same type of move if the roles were reversed.

“I kind of got held up by a few lappers, just a little bit, and that was kind of all that it took,” Forkner recalled. “I was going single-triple into the whoops and clipped it just a little bit, but I think he was still blitzing and I knew that he was faster than me there.

“I heard him there, tried to scoot around the top to just get around the corner and he was there – basically left me no room and I had to go off the track. It wasn’t a bad pass or anything, I would’ve done the same thing, so it was racing. After I went off the track, getting back on I lost being close enough to show a wheel.”

It’s now Ferrandis who leads the point-standings by two points over Monster Energy Star Yamaha teammate Justin Cooper entering San Diego, which will be the final outing for the western region prior to Monster Energy Supercross moving east next week.