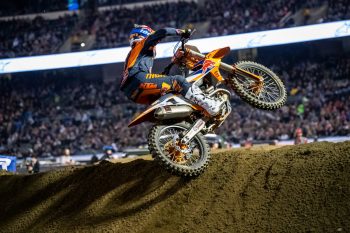 Defending champion Cooper Webb has expressed the importance of claiming runner-up honours at Oakland’s fifth round of Monster Energy Supercross, inching himself closer to the leaders in the 450SX title fight.

It’s been a mixed start to the Red Bull KTM Factory Racing rider’s championship defence, however the number one displayed the form he’s known for in the second half of Saturday’s 21-lap main event.

Webb put on an incredible charge that saw positioned third on the final lap, later going onto pass points leader Ken Roczen (Team Honda HRC) at the final turn to snatch second in the dying moments.

“I thought I was a little far back,” Webb admitted. “I went over the finish it was a pretty far gap. I was just going for it, and I killed the last lap honestly. I made a run on the whoops, and then I missed the only passing bit of the track – we were so close there going back and forth.

“Unfortunately, I made contact with him in that last turn, but I was trying to square him up and get underneath. I’m sorry for the contact, but we were going for it. I really needed to claw my way back into this championship, and every point counts.”

The North Carolina native now sits fifth in the championship standings, moving to 18 points behind Roczen as the series heads to San Diego this weekend.