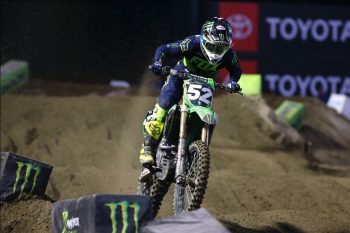 Monster Energy Pro Circuit Kawasaki’s Austin Forkner came out swinging inside RingCentral Coliseum, taking home a runner-up finish on the night. The podium finish pushed him into third overall in the championship standings, 10 points behind the leader and seven behind second place. Teammate Cameron McAdoo rejoined the team in Oakland after sitting out with injury the past three rounds, coming back to win his heat race and eventually finishing the night 14th.

After a larger football stadium last weekend, the riders were back inside a baseball configuration, which has been notorious for being tight and technical. Forkner started the night with a heat race win and a great gate pick for the main event. On the start, Forkner came around third, but was quickly into second and after only one lap made his move for the lead.

Forkner maintained the lead until just after halfway when he made a mistake in the whoops that allowed the rider behind him to overtake as a lapper slowed Forkner. He kept a solid pace for the remainder of the night, finishing second and almost 13 second ahead of the next rider.

“Tonight I felt pretty solid,” said Forkner. “I was happy with my speed and fitness. I just happened to make a mistake right as I was getting caught, which cost me because everyone was so close in lap times. I’m happy with the race, but obviously wish I could have gotten the win.”

McAdoo had been eager to make his return to the races and it showed with his first gate drop resulting in a win in the heat race. In the main event, he got a good start but was pinched off and came around in eighth. McAdoo moved into seventh on the third lap and maintained his position for several laps before a miscue sent him down and he remounted in 13th. When the checkered flag flew, McAdoo earned 14th for the night.

“It was really good to be back lining up for the team,” said McAdoo. “Getting the heat race win felt awesome. I got a decent start in the main and was holding a top 10 but made a mistake and went down. The track was technical and still not being quite 100 percent cost me a little bit in the end. It was great to get out there and see where I was at because I just didn’t know until I did it.”