Ferrandis scores second win of the season at Oakland 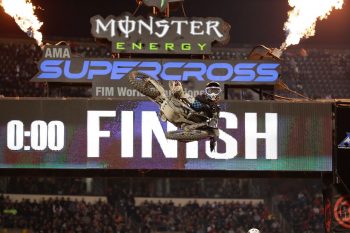 Monster Energy Star Yamaha Racing’s Dylan Ferrandis rode a determined race to take his second win of the Monster Energy AMA Supercross season and move into the 250SX West points lead. Justin Cooper overcame challenges at the RingCentral Coliseum in Oakland, California, to join his teammate on the podium and minimize his points loss in the title chase.

Earlier in the day, Ferrandis kept his streak alive and has yet to be topped in qualifying five rounds into the season. Unfortunately for the defending champ, starts are still something of an Achilles Heel and he had to work his way from fourth to cross the line second in his Heat. In the Main Event, the Frenchman got a much better start in third. A lap later, Ferrandis moved into second and went on to chase down the leader. After the halfway mark, he was on his heels and the pair were approaching traffic. He made his move in the left hander after the whoops and his competitor went off track. Ferrandis took the lead, held on to it to take the checkered flag by 2.3 seconds and leave Oakland with the red plate.

On the flip side, it was another tough night for Cooper. While battling for position in the top-three in his Heat, another rider made contact with him and for the second weekend running, the New Yorker found himself on the ground. He then lost more valuable time trying to get his bike back in the race and had to go to the LCQ to transfer to the Main. Undeterred Cooper went on to lead his LCQ race from start to finish and win by over 11 seconds.

In the Main Event, Cooper had an inspired start from the 19th gate pick, nearly taking the hole shot. Unfortunately, though, he made contact in the first turn with another rider and got shuffled back to sixth. He put his head down and steadily made his way forward on a tight track that was difficult to make passes on, ultimately taking the final spot on the podium by passing his competition in the whoops section. Cooper’s efforts helped salvage points in the championship and after leading the series for the first four rounds, he sits two points behind his teammate as they head to San Diego next week for final 250SX West round before a six-week break.

Next up is Round 6 of the Monster Energy AMA Supercross Championship at the Petco Park in San Diego, California, on Saturday, February 8.