McAdoo return confirmed by Pro Circuit ahead of Oakland

Kawasaki team rider manages to make it back in time before the break. 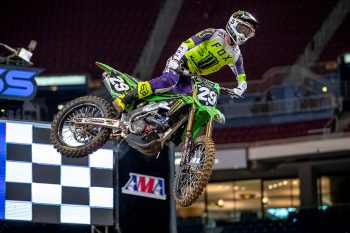 Monster Energy Pro Circuit Kawasaki’s Cameron McAdoo will be back for tomorrow’s fifth round of Monster Energy Supercross in Oakland.

McAdoo was injured in St. Louis during practice, missing three rounds of 250SX West as a result while his lungs returned to 100 percent.

“It will be great to have Cameron back,” confirmed Monster Energy Pro Circuit Kawasaki team owner Mitch Payton. “He’s been eager to get back out there, but we felt it was best for him to get another week under his belt.”

It will be a timely return for McAdoo in Oakland, managing to get two more gate-drops prior to the 250SX West mid-season break following San Diego next weekend. He was sixth at Anaheim’s opener in January.