Podium step the next target for sole JGRMX entry Martin

Minor leg injury on the mend in lead-up to Oakland this weekend. 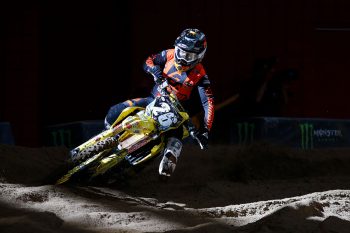 A first podium of the 2020 Monster Energy Supercross season is on the horizon for JGRMX Yoshimura Suzuki’s Alex Martin, currently ranked fifth in the 250SX West standings.

Martin rode through pain from a leg injury suffered during training in the lead-up to Glendale last weekend, but still managed seventh overall.

An 8-8-9 tally enabled him to hold onto fifth in the championship riding the RM-Z250, with additional testing and further development being made to the factory-backed RM-Z250 in the lead-up to round five in Oakland.

“It was great to see Alex getting good starts and pushing through his best after crashing hard on Wednesday in practice,” commented JGRMX team manager Jeremy Albrecht. “It’s all part of racing and we’re happy to see improvements each week, even being banged up.

“Alex is coming to our test facility this week to improve his whoop speed and test some new parts – I believe in Alex and our team to get up on the box soon.

“Alex busted out the quad in the race, something not many 250 riders were able to do. He tried his best, but he struggled in right hand turns due to his sore leg. Next week he will be in better shape and I expect better results.”

Martin – who was the lone JGRMX rider in Arizona – added: “Glendale was a tough race for me. A mid-week crash really hurt my chances of being competitive for a podium. I managed to stay consistent enough to grab seventh overall in the Triple Crown format.

“I’m happy to move on from this one and I’m looking towards making some changes this week with the team. We’ll come out swinging in Oakland.”

So far this season Martin has recorded relatively consistent finishes through the opening four rounds, with 10th at Anaheim 1, fourth in St. Louis, fifth at Anaheim 2 and seventh in Glendale. His most recent podium came with second in Atlanta during 2017.