Momentum key prior to break in 250SX West says Forkner

Upcoming six-week layoff welcomed by some and not by others. 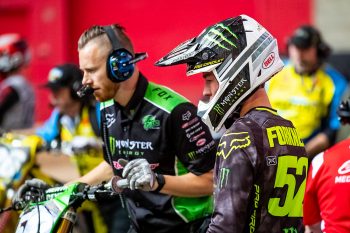 Forkner was able to take his second victory of the season on Saturday night via a 1-1-3 scorecard, climbing to fourth in the standings following a 17th-place result at Anaheim 2.

The Monster Energy Pro Circuit Kawasaki rider is within 10 points of current leader Justin Cooper (Monster Energy Star Yamaha) and will be determined to capitalise on his mid-season momentum in Oakland and San Diego prior to the series going east.

“It depends if you have momentum, then you’re dreading the break and you want to keep racing,” Forkner explained. “But if you need to regroup, need a break, need some time off… maybe ride a little bit of outdoors, work on the bike or whatever your deal is, that’s going to determine how you feel about the break.

“For me, I feel like we worked a lot this week on the bike, the whoops have not been the strongest point for me and I’ve had a couple of crashes in them this season, so we worked on a lot of stuff and got it better. I don’t really know how I feel about the break, I just know that I need to keep trying to win races and make up points, really.”

Following six rounds of the 250SX East series, the western region will return to action on 28 March in Seattle, which is round 13 of the 450SX season. The first East/West Showdown will take place in Denver at the beginning of April.