Various racers comment following fourth round of the season.

In Quotebook, a selection of riders detail round four of the 2020 Monster Energy Supercross, an FIM World Championship, at Glendale in Arizona. 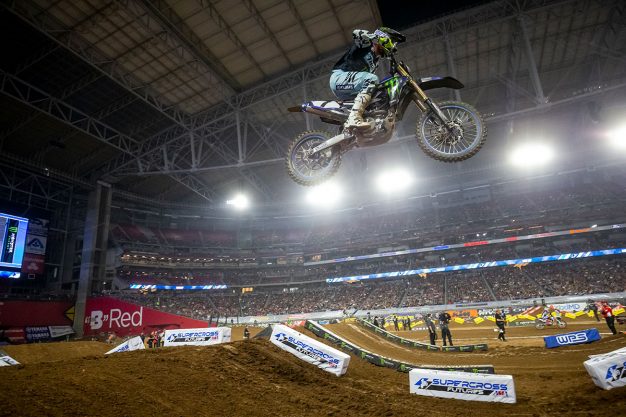 Cooper Webb (Red Bull KTM Factory Racing) – Fourth:
It was a good day. It’s kind of crazy, we had a bunch of red flags so we ended up with a lot of starts tonight. I feel like I finally figured out my starts by the end and I was up front and able to run with the lead group but I just didn’t quite have it tonight. It was a good turnaround from the first Main Event but we’ve still got some stuff to work on and we’ll keep plugging away and try to improve this week before heading into Oakland.

Jason Anderson (Rockstar Energy Husqvarna Factory Racing) – Third:
All in all I had a great night. I keep getting better as the season goes on, I feel like I keep racing better and better. It’s been a good night. The team is working hard and we’re ready to start charging and make some headway.

Justin Barcia (Monster Energy Yamaha Factory Racing) – Fifth:
It was a difficult day right off the bat. The track changed as the night went on and I struggled with turning a little bit and in the whoops, but it was the starts that really hurt me. I had to fight a lot tonight to get up to where I was able to finish, but with such short races like this, it’s difficult. The track was very one-lined, and it was very difficult to pass. Triple crowns are gnarly. Everyone’s so fast. If you don’t get a good start it’s just difficult to put yourself in a good position. There were guys flying around everywhere tonight and crashing, so I’m glad to be getting out of here healthy. I’m a smarter, more mature rider than I have been in the past, so I’ll take what I can get tonight like I did last week. It’s only round four. We’re still in a decent spot and just need to keep plugging away.

Aaron Plessinger (Monster Energy Yamaha Factory Racing) – Ninth:
The first Triple Crown of the year, Glendale, was pretty good. I qualified 15th which wasn’t great. In the first main I got a mid-pack start and worked up to seventh in the first half of the race, but in the second half it kind of fell apart. I started hitting the whoops bad, so yeah, we struggled a little bit in the second half. Then the second main I got a really good start. I was running up there with the boys, but I just couldn’t figure out the whoops. I was fast everywhere except the whoops. I got another good start in the third main, not as good as the second one, but I just charged and tried to put myself in a good position and I got a pretty good finish. Overall it’s my best finish this season. We have to go back and do some more work. I can’t wait until Oakland next week.

Adam Cianciarulo (Monster Energy Kawasaki) – Eighth:
That was definitely not how we wanted to finish the night and although this is part of racing, it’s always a tough pill to swallow. We kicked off the day qualifying fastest again and honestly, I was feeling good all day. I made some mistakes out there and that last one cost me. I’m sore and a bit frustrated but I have a great team behind me, who continue to remind me there are a lot more races left to go in this premier class. We’ll take the week to recuperate and look to come out strong in Oakland.

Eli Tomac (Monster Energy Kawasaki) – Second:
These Triple Crown races are already crazy and then to add the two red flags, there was just a lot going on. We technically had five starts tonight and I didn’t exactly help myself on those, but I was able to make my way to the front and remain consistent with my finishes. Consistency really was the key tonight and the team worked their tails off to help me finish up on the podium. We still have some work to do but overall, we had a successful night and I’m glad we’re close in the point standings.

Ken Roczen (Team Honda HRC) – First:
I can’t believe we won all three main events! I think it’s the focus that we bring. Between my team and especially my mechanic, we just have a good regimen going into all the races. Every time we go down there for a gate drop, I just want to put maximum focus, put myself in a good position and make life a lot easier—and safer as well. We had some good battles with Eli [Tomac] in the first one, but I was stoked to pull it off. I got a decent start in the second one, and then we had to do a restart unfortunately. I grabbed that holeshot and rode a super-solid race and won. The first start for race three was not good, and me and Tomac were battling in like eighth or something. Then we had another restart, and I pulled the holeshot there and just rode a super-solid race. I had a good time tonight, and I’m really happy with how the team has been excelling and making changes to the bike. We’ve been working really well together, and the team spirit is high right now. Obviously, I’m beyond stoked and want to enjoy tonight and tomorrow, but then get back to work and keep 100 percent focus.

Justin Brayton (Team Honda HRC) – Sixth:
The night went pretty good, but I had a lot of bad starts for some reason. I really struggled with track position at the beginning of the race, and I came from the back pretty much all three races. I’m a little disappointed in that because I felt like with my lap times, a better track position could have given me a top-five finish. But to end up sixth is nothing to hang our heads for at all. It was a positive night, awesome to see Kenny get the win, and the team’s just jelling really well right now – everyone’s doing an amazing job, and I keep getting better and better every weekend. I hope to keep this momentum rolling and be in the top five next week. 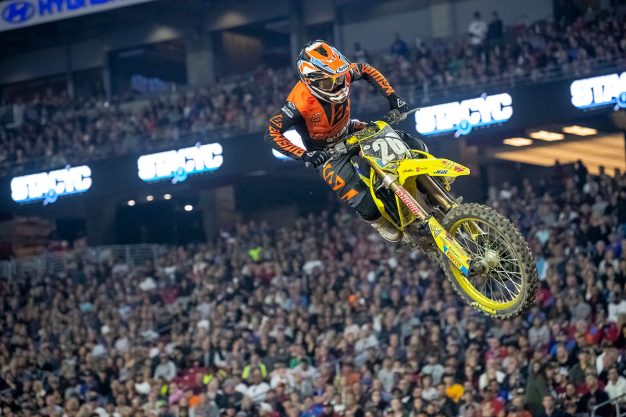 Justin Cooper (Monster Energy Star Yamaha Racing) – Ninth:
It was a roller coaster night in Glendale. The track conditions were really tricky and traction was very hard to maintain. I was able to come back with the win in the third Main and hold onto the points lead. We’re going take the positives and learn from the mistakes and move on to next weekend and go for the win again.

Dylan Ferrandis (Monster Energy Star Yamaha Racing) – Second:
I can’t say it was a bad day, because it could’ve been much worse. I’m a little disappointed to miss the win. I feel like the bad starts cost me the win tonight, but the speed was there and I made a lot of passes. I was really stoked with my physical feeling because I was not tired at any point, my riding was really good and the bike was awesome. We just need to improve on the starts. I don’t understand why I’m struggling with the starts right now, but we are working with the team and have made some changes. Now we are three points from first place in the championship – that’s the big goal.

Austin Forkner (Monster Energy Pro Circuit Kawasaki) – First:
I’ve been working on the whoops with the team all week because I’ve really been struggling there, so I was ready to race tonight. I’ve had to dig myself out of a hole after last weekend and now 10 points down isn’t too bad. I’ll just keep grinding, chipping away at those points and continue to dig out of this hole. Overall, it was a great night for the entire Monster Energy Pro Circuit Kawasaki team and we’re looking to keep it rolling.

Christian Craig (Geico Honda) – DNF:
I was super excited to be back in Glendale. It’s where I won a few years ago and I just love the dirt, stadium and fans there. The whoops were pretty good too and didn’t break down much, which suits me well. I really felt like it was my night to at least podium if not better. The first main was pretty good. I got the holeshot then [Austin] Forkner shot me off the track. I was able to make my way up to third from probably seventh or eighth after going off the track. I was pumped on my riding that first main. Second main I got a mid-pack start and made my way to probably sixth pretty quickly in the first lap. A bunch of us were going into a corner after the sand and I grabbed my brake a little too hard. So it was just one thing after another. I worked hard to be able to race this year so it sucks honestly. It’s clear I can be a front-runner, which makes me happy, but set back after set back gets frustrating. I’ll get myself all fixed up and be back in Seattle after East Coast break.

Luke Clout (Penrite Honda Racing) – 10th:
I am bummed I crashed on Friday and broke my toe. My foot was extremely sore, I can’t say it affected my riding, but I was conscious of it. Another top 10 is good, but I am not happy with these overalls. I know what I need to work on and I will continue to push forward, having Buddy [Antunez] will make a difference, everyone on team is working towards a common goal and I appreciate them.

Mitchell Oldenburg (Penrite Honda Racing) – Sixth:
I got bad starts tonight and it hurt my overall chances. We have a lot of work ahead of us, I am still not 100 percent following my crash at A1, but I am feeling stronger and I can’t wait to throw everything I have at it.

Alex Martin (JGRMX Yoshimura Suzuki Factory Racing) – Fifth:
Glendale was a tough race for me. A mid-week crash really hurt my chances of being competitive for a podium. I managed to stay consistent enough to grab seventh overall in the Triple Crown format. I’m happy to move on from this one and I’m looking towards making some changes this week with the team. We’ll come out swinging in Oakland.