Gradual advancements made by Webb on way to fourth 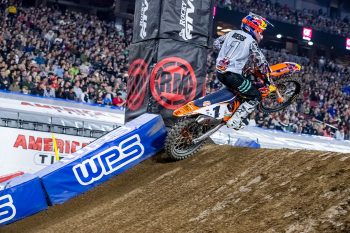 Webb was lacking in the whoops when it counted at round four of the Monster Energy Supercross season, missing the podium after scoring 8-5-4 results in the Triple Crown format.

“It was a good day,” recalled Webb. “It’s kind of crazy, we had a bunch of red flags so we ended up with a lot of starts tonight.

“I feel like I finally figured out my starts by the end and I was up front and able to run with the lead group, but I just didn’t quite have it tonight.

“It was a good turnaround from the first main event, but we’ve still got some stuff to work on and we’ll keep plugging away and try to improve this week before heading into Oakland.”