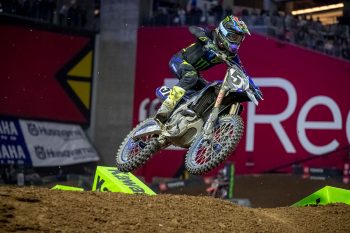 Barcia registered a trying 6-8-7 tally to salvage a top five finish on a night that saw multiple red flags across the trio of 450SX main events.

Mid-pack starts and further set-up challenges made for a long night according to the Anaheim 1 winner, however, he remains in title contention and is determined to turn his form around as the mid-season approaches.

“It was a difficult day right off the bat,” he explained. “The track changed as the night went on and I struggled with turning a little bit and in the whoops, but it was the starts that really hurt me.

“I had to fight a lot tonight to get up to where I was able to finish, but with such short races like this, it’s difficult. The track was very one-lined and it was very difficult to pass – Triple Crowns are gnarly, everyone’s so fast. If you don’t get a good start it’s just difficult to put yourself in a good position.

“There were guys flying around everywhere tonight and crashing, so I’m glad to be getting out of here healthy. I’m a smarter, more mature rider than I have been in the past, so I’ll take what I can get tonight like I did last week. It’s only round four. We’re still in a decent spot and just need to keep plugging away.”

Barcia currently sits third in the standings, trailing Ken Roczen (Team Honda HRC) by 11 points with 13 rounds still remaining. Next will be Oakland in Northern California this Saturday night.