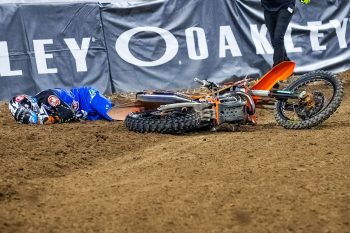 Team Rocky Mountain ATV/MC KTM WPS has confirmed Justin Bogle will sit out round five of the 2020 Monster Energy Supercross season after being concussed at Glendale last Saturday night.

Bogle went down at the beginning of main event two in the Triple Crown event, quickly attended to by the Alpinestars Mobile Medical Unit crew and transferred to hospital for further checks.

“After a number of tests, including a full-body CT scan, it was determined he had endured a general concussion and was released that evening,” a post-race report from the Rocky Mountain ATV/MC KTM WPS team confirmed.

“Justin will be meeting his neurologist this week to begin the AMA Supercross series’ regular concussion protocol and will be sitting out this weekend’s race in Oakland. As a team we fully support our riders and want what is best for them.”

Prior to his incident, Bogle finished 14th in the first race and was credited 21st overall for the round in Arizona. He’s now positioned 16th in the standings entering the Oakland stop of the season this weekend.