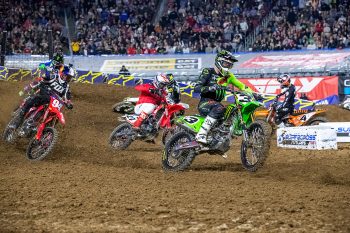 There were early red flags flown in finals two and three on Saturday night, making for two complete restarts and adding to the ‘already crazy’ format of three finals.

Monster Energy Kawasaki’s Tomac was able to claim second overall via 2-2-3 results, managing to overcome difficult starts throughout the night on his way to collecting 23 points toward his title bid.

“These Triple Crown races are already crazy and then to add the two red flags, there was just a lot going on,” Tomac commented. “We technically had five starts tonight and I didn’t exactly help myself on those, but I was able to make my way to the front and remain consistent with my finishes.

“Consistency really was the key tonight and the team worked their tails off to help me finish up on the podium. We still have some work to do but overall, we had a successful night and I’m glad we’re close in the point standings.”