Glendale’s fourth round of Monster Energy Supercross saw Ken Roczen secure a dominant Triple Crown victory. In this edition of Debrief, the Team Honda HRC rider recounts his triumph with questions from the post-race press conference. 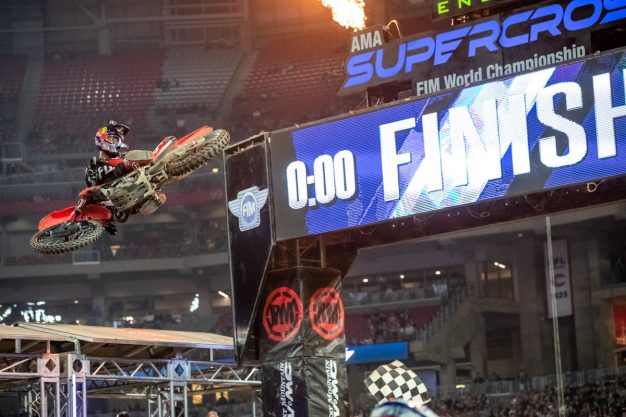 Congrats Ken. Two red flags tonight for the 450SX class, take us through what you do in that moment and what you do to recover…

There weren’t a lot of manners going on tonight – after that second start, I went all the way up there and started braking, and the guys on the inside just ploughed to the front. I was kind of shocked – it was like a 250 start where they just didn’t let off, and obviously that ended up in a red-flag. I just try to have a clean slate every time something like that happens. I had good battles tonight with Eli [Tomac] – I just had a lot of fun and I’m really confident in my starts – that helps. Thos red-flags are never fun to see – first of all for the person that’s down, and every time you line back up on the start, there are 22 guys or so going down the start straight into the first turn, so there’s some sketchiness happening down there. Any extra start definitely doesn’t help, but overall we just stayed out of trouble – I had to two hole-shots tonight, and overall I just rode really well and calm. We were really focused – I’m still blown away on having three main event wins. It’s great – I had an awesome time tonight.

I don’t think we’ve seen anyone pass Eli around in the sand around the outside like you did in the at first main event, is that just confidence from getting that win a couple of weeks ago?

I wouldn’t say it has anything to do with getting the win a couple of weeks ago – I just made up my mind before the finish line that I was going to go the outside. I kind of had a feeling that both of those guys were going to go to the inside, so first off I didn’t want to get roosted, but I just kind of took a chance – it’s not really a chance, I was riding offensively and not defensively. I just trusted in it.

With the three main event sweep, did this one kind of feel easy at all?

I don’t think that’s the right way of saying it, but starts helped for sure. Nothing is ever easy, and obviously in the first one, I had Eli on my tail the whole time. We had some good battles going on, and even on that last one before the red-flag, we were kind of buried in the pack, so we were going back and forth passing each other, which was awesome really – everything was super clean, but it was hard riding. I had a lot of fun, and even that point you can technically improve your start, I was kind of disappointed seeing the red-flag because it was like ‘dang, another one?’ Again, I mentally cleaned everything out and just focused on the last one to try and improve. 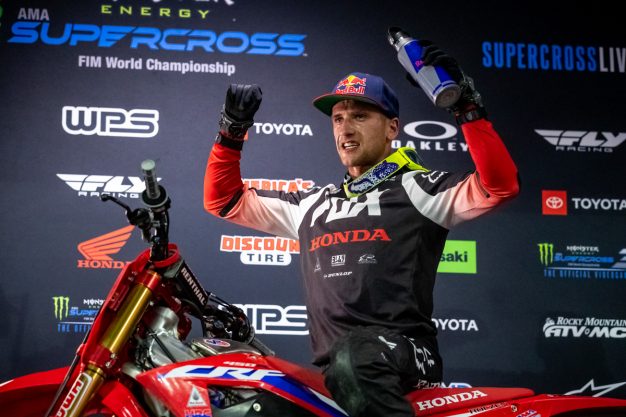 I personally prefer longer starts because I feel like it spaces out the field, and that should take the sketchiness away – at the same time, a start is a start and anything can really happen. Yes, we do get up to pretty high speeds as you can see, but I’m normally a bigger fan of longer starts – also for positioning, it doesn’t really matter if you’re inside or outside. You can technically get a good start from anywhere.

When you have Eli breathing down your neck for a whole main event, can you take us through how you react to it? Does your heart rate eventually come down and do you get used to him being there?

It’s experience, and it’s not the first time we’ve done that to each other. Ultimately it’s just years and years of racing, and it’s very important to keep calm and keep a cool head. You can hear the bikes and whatnot, but when hit a turn or rhythm section not as good, you can tell someone is coming on the inside – it’s kind of your instincts a little bit and experience over the years.

You’re racing a lot more with the Triple Crown format, how much more endurance does a Triple Crown have compared to a normal main event in Supercross?

Obviously, we have our entire day program, and going into the night show, if you compare there, it’s pure fast-lap race time, that’s for sure. At the same time, we prepare ourselves for it, so it shouldn’t really affect anything. But yes, the Triple Crown races make for a lot more pure fast-lap racing. Going from the heat races to the main, we’re really not on the track that much, but tonight – especially with all the restarts – we rode a lot, for sure.