Momentum on the rise for Husqvarna leader with Glendale top three. 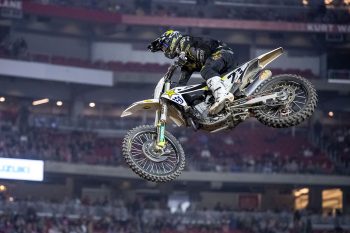 The 2018 champion has been a picture of consistency after sitting out much of his title defence last year, already claiming two podiums in four rounds.

Anderson went 5-3-2 in the first Triple Crown event of the season on Saturday and was leading main event three prior to a red flag, indicating that he will be a force for race wins in the coming weeks.

“All in all, I had a great night,” Anderson said. “I keep getting better as the season goes on, I feel like I keep racing better and better – it’s been a good night. The team is working hard and we’re ready to start charging and make some headway.”

Following the Arizona stop of the series, Anderson is fourth overall and just 14 points from red plate-holder Ken Roczen (Team Honda HRC), who captured his second win of the year over the weekend.