250SX West challenger plotting a return at Seattle in March. 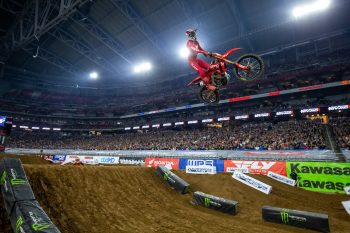 Geico Honda will likely miss round five of Monster Energy Supercross at Oakland after Christian Craig suffered a hand injury in Glendale over the weekend.

The popular 250SX West contender endured his third-straight DNF at Saturday’s fourth round when he crashed heavily in main event two, where he was initially treated for a cut to his head before it became know he had also sustained a fractured hand.

Craig will sit out the next two West coast rounds and will return at Seattle, which comes after the East coast break. With the recent injury to Jett Lawrence, the Honda squad made a statement that it will not source a replacement for at least this weekend.

“[In the] second main I got a mid-pack start and made my way to probably sixth pretty quickly in the first lap,” said Craig. “A bunch of us were going into a corner after the sand and I grabbed my brake a little too hard. So it was just one thing after another.

“I worked hard to be able to race this year so it sucks honestly. It’s clear I can be a front runner which makes me happy but set back after set back gets frustrating. I’ll get myself all fixed up and be back in Seattle after East coast break.”

It’s been a troubling return to racing for Craig after having his WADA sanction lifted, scoring a podium at Anaheim 1 before recording a trio of non-finishes.