Craig bounced out of Glendale Supercross 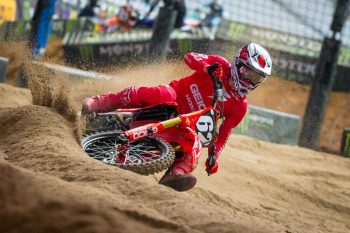 The hits keep coming for the GEICO Honda team in AMA Supercross, as Christian Craig showed good form again only to suffer a crash that knocked him from competition. In the Triple Crown format, featuring three races, Craig scored a strong third in the first race. A crash in the sand in the second race proved costly, however. Craig suffered injuries that not only prevented him from getting back to racing in Glendale, but will also keep him out of action for the next two rounds of 250SX action.

“I was super excited to be back in Glendale. It’s where I won a few years ago and I just love the dirt, stadium and fans there,” said Craig. “The whoops were pretty good, too, and didn’t break down much which suits me well. I really felt like it was my night to at least podium if not better. The first main was pretty good. I got the holeshot then [Austin] Forkner shot me off the track. I was able to make my way up to third from probably seventh or eighth after going off the track. I was pumped on my riding that first main. Second main I got a mid-pack start and made my way to probably sixth pretty quickly in the first lap. A bunch of us were going into a corner after the sand and I grabbed my brake a little too hard. So it was just one thing after another.”

At the track, Craig was treated for a cut near his eye, and then attention turned to his ailing hand and pinkie. It turns out Craig suffered a fracture in his hand, and that will prevent him from racing the next two races in California. He expects to be fully healthy after the 250SX West season resumes in Seattle on March 28th.

“I worked hard to be able to race this year so it sucks honestly,” said Craig. “It’s clear I can be a front runner which makes me happy but set back after set back gets frustrating. I’ll get myself all fixed up and be back in Seattle after East Coast break.”

Craig’s teammate Jett Lawrence is already out with a broken collarbone suffered last weekend in Anaheim. Combined that with the injuries to Craig, and the GEICO Honda team will likely miss this weekend’s upcoming race in Oakland, California.