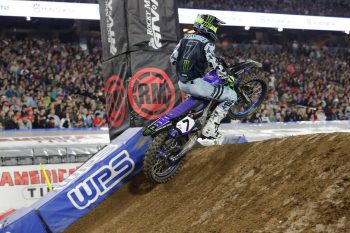 In the first Main Event, both Monster Energy Yamaha Factory Racing Team riders got caught mid-pack at the start. Barcia was able to avoid a multi-rider pile up on the first lap and move into sixth. He then closed the gap on fifth and made a couple of moves but ultimately had to settle for sixth. Plessinger was able to make forward progress, as well, working his way up into seventh, but started struggling in the whoops section and ultimately got shuffled back to 11th.

With another shot at it in the second of the three 12-minute-plus-one lap Main Events, the newly turned 24-year-old got a great start in third while his veteran teammate was stuck around mid-pack again. Unfortunately for Plessinger, the whoops still presented a challenge and he started to lose positions. Barcia kept pushing forward and was able to pass his teammate in the final laps and finish eighth.

It was more of the same in the final Main. Barcia quickly recovered from a bad start to go from 11th to ninth while his teammate got a much better one in sixth, although he got shuffled back a few positions. On lap four he was able to pass Plessinger before the whoops and make it stick. Towards the end of the race, both riders were able to advance those positions one further after a competitor got caught out in the challenging conditions and crashed out of the race.

In the end, Barcia’s 6-8-7 tally earned him fifth overall and salvaged some valuable points in spite of the challenging format and conditions. He currently sits third in the standings, trailing the leader by 11 points with 13 rounds still remaining. As for Plessinger, the sophomore Supercross rider continued to make progress, and notched his best result of 2020 with a ninth-place overall result (11-9-8).

Next up is Round 5 of the Monster Energy AMA Supercross Championship at the RingCentral Coliseum in Oakland, California on Saturday, February 1.