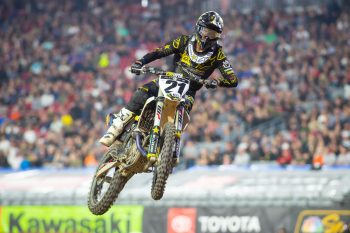 Rockstar Energy Husqvarna Factory Racing’s Jason Anderson secured his second 450SX podium of the season on Saturday with a third-place finish at the Glendale SX Triple Crown, Round 4 of the 2020 AMA Supercross World Championship Series in Arizona. His teammate, Michael Mosiman, made his first podium appearance of the season with a solid third-place in the 250SX West division.

With three shortened Main Events combining into one overall score, consistency was key with the Triple Crown format and Anderson made it happen with 5-3-2 scores throughout the night. In Main Event 1, Anderson grabbed a top-five start and he rode an uneventful race to capture a top-five finish. In Main Event 2, Anderson began in sixth and quickly made his way inside the top-five by lap three. He continued to charge his way into podium contention to ultimately capture a strong third-place finish.

In Main Event 3, Anderson got off to a great start in second and passed his way into the lead early on. However, the red flag was thrown soon after and the race was restarted. Off the restart, Anderson grabbed a third-place start and he battled his way up to second just before the halfway mark. From there, he charged ahead to finish the night off with second-place.

“All-in-all, I had a great night,” Anderson said. “I keep getting better as the season goes on, I feel like I keep racing better and better. It’s been a good night. The team is working hard and we’re ready to start charging and make some headway.”

In the first Main Event, Wilson got off to a 15th place start and worked his way up to 12th late in the race but he ran into an issue that ultimately dropped him back to 16th. In Main Event 2, Wilson began just outside the top-10 and he shuffled positions until solidifying 10th with five laps to go. In Main Event 3, he got off to a 15th place start and climbed his way up to finish in 11th. With 16-10-11 finishes, Wilson ended the night with 13th overall.

In Main Event 1, Osborne shot off the line and into the early lead as he battled to maintain his position early on. However, he had a big crash on the next lap that would ultimately end his race early. In Main Event 2, Osborne got tangled up with another rider off the start and was forced off the track in the first turn but the red flag came out shortly after and all riders were sent back to the starting line. Off the restart, Osborne didn’t get the best jump but he worked his way from 15th up to an 11th place finish.

In the 250SX Main Event 1, Mosiman got off to a great start inside the top-three and jumped into second by lap two. He continued to battle up front where he ultimately finished fourth in the first race. In the second main, Mosiman shot off the line to capture a top-three start, where he battled up front early on. About halfway through, he got passed for one position where he finished just off the podium in fourth. In Main Event 3, Mosiman struggled to get a clean start as he began the opening lap back in 14th. He quickly began charging his way through the pack where he ultimately finished sixth in the race and third overall for the night.