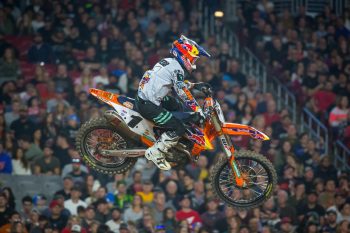 Red Bull KTM Factory Racing’s Cooper Webb raced his way to a fourth-place finish at Saturday’s Glendale SX Triple Crown in Arizona for Round 4 of the 2020 AMA Supercross Championship.

With three 12-minute-plus-one-lap Main Events, the Triple Crown format made for an eventful night of racing as 450SX riders were faced with two red flag restarts and plenty of close racing in between a total of five gate Main Event drops. With combined results of 8-5-4, Webb was able to maintain his focus and increase his momentum throughout the evening to end on a strong note in fourth overall.

In Main Event 1, Webb didn’t get a favorable start as he rounded the opening lap in 13th place. He worked his way into the top-10 by the halfway point but with a shorter race time he was only able to make his way up to an eighth-place finish. In the second main, Webb powered his KTM 450 SX-F FACTORY EDITION to a much better start as he battled in the second-place position early on.

Dicing back-and-forth between top positions, he ultimately secured a fifth-place finish. In the third and final Main Event, Webb got off to another great start in second as he battled for the early lead before settling into third. With four laps to go, he got passed for the final podium position but he continued to fight hard as he finished strong in fourth.

Cooper Webb: “It was a good day. It’s kind of crazy, we had a bunch of red flags so we ended up with a lot of starts tonight. I feel like I finally figured out my starts by the end and I was up front and able to run with the lead group but I just didn’t quite have it tonight. It was a good turnaround from the first Main Event but we’ve still got some stuff to work on and we’ll keep plugging away and try to improve this week before heading into Oakland.”