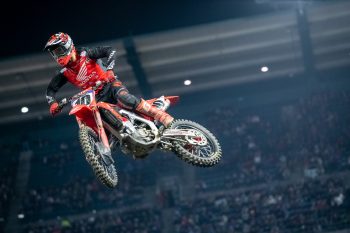 The Iowa native has recorded 8-8-7 results across the first three rounds of the series, with track position ultimately denying him a chance of challenging with the front runners.

“With a better track position, I definitely think I could end up on the podium,” Brayton commented. “Overall a really good night, and although the first three rounds have gone well, I’m looking forward to improving and getting into the top five.”

Ranked ninth in the championship standings, Brayton enters this weekend’s fourth round as Glendale as a favourite to land on the box as the Triple Crown format is rolled out for the first time this year.

The number 10, who has always performed strongly in the three-race schedule, has also just come off an Australian Supercross Championship campaign where majority of rounds featured the intense and chaotic format.