Factory Kawasaki looking to carry momentum into Glendale this weekend. 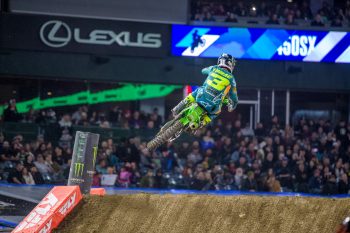 A2 victor Eli Tomac says he’ll take is usual approach into this weekend’s fourth round of Monster Energy Supercross at Glendale, despite describing the Triple Crown format as ‘stressful’.

The Monster Energy Kawasaki rider returned to form last weekend with a dominant victory in the main event, the number three eager to get his title bid on-track after a pair of difficult outings in the opening two rounds.

Tomac, who currently sits third in the standings, acknowledges every main event counts in the unique Triple Crown schedule that will unfold in Arizona on Saturday night.

“We’ll keep up what we’ve been doing at this point,” said Tomac. “You know, the Triple Crown’s are tough and they’re stressful – you have to go out there and perform in all three of those races.

“The heat race you can kind of get warmed up for the night, but in the Triple Crown, the first score matters and it means a lot. You’ve got to be ready early for them.”