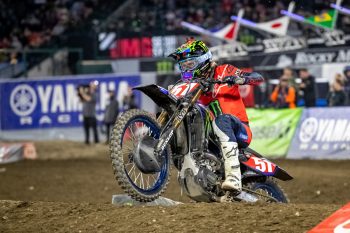 Monster Energy Yamaha Factory Racing’s Justin Barcia has compared his current campaign to previous seasons, stating he’s ‘in a good position’ after escaping the first three rounds uninjured and second in the points.

The New York native acknowledged he’s had difficulty making it through the opening rounds of the championship in the past, and despite a ninth place finish at A2 last weekend, he’s feeling upbeat heading into Glendale’s Triple Crown this Saturday night.

“In the past I haven’t been able to get through the first three rounds healthy, so we’re in a good position,” Barcia commented. “We’re only three points down – I’m feeling good about that.

“I’m really excited for Glendale next weekend, I really like that track and stadium, so I’m just going to keep moving forward and get ready for the next race.”

Barcia currently sits between Ken Roczen (Team Honda HRC) and Eli Tomac (Monster Energy Kawasaki) in the points standings ahead of the fourth round of Monster Energy Supercross.