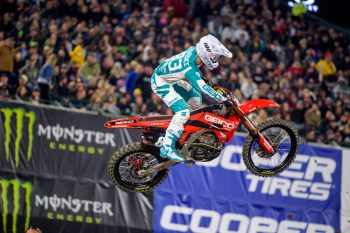 Geico Honda’s Jett Lawrence is eyeing a return to racing at Seattle’s stop of Monster Energy Supercross in March as he recovers from a collarbone injury sustained at Anaheim 2 last weekend.

The 250SX West sensation led majority of the 18-lap encounter last Saturday night in a spirited performance that garnered him race fans across the globe, however it ended in a brutal crash at the end of the whoop section on the final lap while trailing reigning champion Dylan Ferrandis (Monster Energy Star Yamaha Racing).

Speaking in a film posted by the Supercross series, the 16-year-old Australian indicated he’ll be sidelined for up to six weeks, with Seattle’s seventh round of the West series the target for a return to competition.

“Hopefully I don’t lose any of my speed or my balance,” Lawrence explained. “That’s the main thing with injuries – when you come back, trying to get that balance.

“I think I’m going to be four to six weeks out – six until I’ll probably get back on the bike. I think I’ll probably come back in Seattle – we’re going for that, but we’ll have to wait and see.”

Lawrence had been highly-impressive in his first three Supercross appearances, where rookie mistakes denied him of a maiden podium.