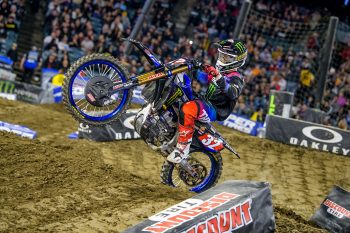 Current 250SX West points-leader Justin Cooper managed to put a challenging round behind him at Anaheim 2 by securing a third-straight podium of the 2020 Monster Energy Supercross season.

Cooper captured his first-career victory at Anaheim 1 and has finished in second position both at the St. Louis and Anaheim 2 rounds.

It’s that picture of consistency that has enabled him to build a 12-point advantage following three rounds, despite qualifying fourth and finishing a distant third in his heat race on the weekend.

“It was just a tough day all day, but we were able to come through when the time was right and land on the podium again – we got some good points,” Cooper commented.

“The track was definitely tough tonight and it was pretty tricky. It was hard to find a flow out there, but I did the best I could, knocked off some consistent laps, rode smart and ended up with a good result.”

Cooper currently leads the 250SX West standings ahead of Monster Energy Star Yamaha Racing teammate Dylan Ferrandis, the defending champion who picked up his first victory of the year at A2.