Fourth-place result in 450SX at Anaheim 2 an inspiring result. 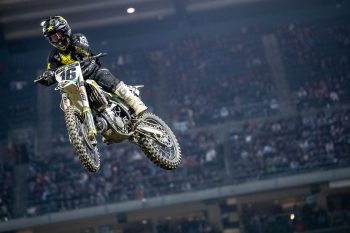 A season-best fourth at Anaheim 2 has Rockstar Energy Husqvarna rider Zach Osborne eager to secure a first podium of the year in Monster Energy Supercross.

The two-time 250SX champion is contesting his second season in the premier class and he’s been gradually improving three rounds into 2020.

A2 marked a slow start to the day for Osborne, who struggled to find speed in qualifying and the second heat race, qualifying via ninth-place in the final transfer position.

Osborne’s momentum completely changed in the final as he got off to a good start, rounding the opening lap in third. He shuffled back to sixth early on, but fought his way back into the top five just after the halfway point and from there he charged up to fourth, finishing only 10 seconds from the victory.

“It was a pretty good night,” recalled Osborne. “I struggled all day to get in a good flow, but I turned it around for the main event. I moved up in the points a little bit, so we’ll just keep building and keep hammering. I think podiums and wins are coming, it just takes some time to find your race speed.”

After finishing 14th at Anaheim 1, Osborne has made himself a fixture in the top five since, landing fifth in St. Louis and fourth and A2 on Saturday night. He’s now climbed to seventh in the 450SX standings.