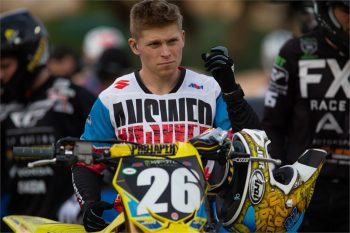 JGRMX/ Yoshimura/ Suzuki Racing’s Alex Martin continued his streak of top-five finishes on his RM-Z250 at round three of the 2020 Monster Energy AMA/ FIM World Supercross Championship in Anaheim, California that ties him for fourth in the championship points standings.

Jimmy Decotis gained more experience in the 450 class aboard the RM-Z450 and will now start his transition to the 250 East Coast series where he looks to contend for wins.

Martin was determined to get the JGR Suzuki team on the podium at A2 after just missing a top-three position by a few tenths of a second at A1. After running in third place in his heat race, a block pass sent him into the second set of whoops slightly off-speed resulting in a crash. Martin got right up but elected to leave the heat to regroup and prepare for the Last Chance Qualifier.

A-Mart pulled a huge holeshot from one of the outside gates and had a smooth ride into a Main Event transfer position. In the main, Martin rounded the first lap in eighth and steadily moved up the leader board. On the final lap, a tumble ended his shot at the podium, but he was able to finish strong with his third top-five finish of the year.

“I struggled throughout the day to get comfortable with the track,” said Martin. “I had a painful crash in the heat race, forcing me to go to the LCQ. The Main Event turned out to be the best I felt and rode all day. I was very close to another podium this weekend if it wasn’t for a late race mistake. I’ll take the top-five result and move forward healthy.”

“It was a challenging track and we’re happy that Alex was okay after his two crashes,” said Team Manager Jeremy Albrecht. “Alex is getting better each weekend and I’m excited to head to Phoenix for the Triple Crown.”

Jimmy Decotis capped off his efforts in the 450 class and will now focus on preparing for the East Coast rounds which begin on February 15th in Tampa, Florida. Plagued with bad starts on the big bike in Anaheim, Decotis never dropped a position during his heat race and the Last Chance Qualifier. He improved his position by 14 places over the two short races, but it was not enough to transfer into the main. Jimmy D will use his experience on his JGR-tuned 450 to better prepare himself for the 250 East Coast title.

“Anaheim 2 was a tough weekend,” said Decotis. “I made some great progress with the bike but didn’t get the starts I needed to run up front. I’m looking forward to the East coast and to get back up front where we belong. Thanks to the crew for keeping my spirits high this weekend!”

“Jimmy needed better starts with the deep field in the 450 class. He will now focus on the 250 to be his best when the series goes East,” added Albrecht, confirming Decotis will not compete in the 450 class in Phoenix.

Unfortunately, full-time 450 rider Fredrik Noren was unable to compete in Anaheim due to a foot injury that occurred in St. Louis. ‘Fast Freddie’ will undergo surgery this week and is looking forward to getting back on the track soon and healthy.

The JGRMX/ Yoshimura/ Suzuki Racing team heads to State Farm Stadium in Glendale, Arizona looking for another strong ride from Martin and a chance to get into the top-three in 250 West Coast points.