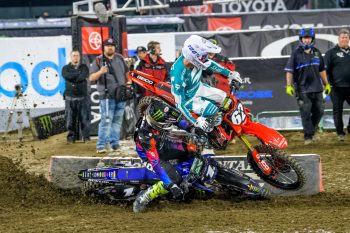 The pair were battling for second position when reigning champion Ferrandis made an ambitious manoeuvre on the inside of Craig, resulting in a heavy clash between them.

Craig, who suffered the brunt of the fall, hobbled back to his bike, although his severely damaged CRF250R forced him to record a DNF for the second straight weekend.

“In the main, I got the holeshot and led some laps before my teammate passed me,” Craig explained. “I stayed with him for a while and knew Ferrandis was catching us.

“I knew he was right behind me for a couple of laps and knew he was going to go for it eventually, but did not expect that outcome. At the end of the day, this is racing.

“Yeah it sucks, but there’s no point in dwelling on it when I can’t change the outcome. I’m happy to be healthy and going to Glendale next weekend.”

Ferrandis went onto the win the main event, and was later handed a 12-month probation for the incident. Craig is positioned 15th in the championship standings as Monster Energy Supercross heads to Glendale in Arizona this weekend.