A2 result a ‘tough one to take’ admits Forkner following crash 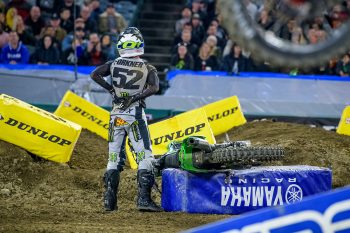 250SX title challenger Austin Forkner has admitted that Anaheim 2’s third round of 2020 Monster Energy Supercross was a ‘tough one to take’ after a crash saw him cross the finish in 17th position.

The second round victor put a dent in his championship campaign when he crashed in the challenging whoop section during the final, as it now sees him positioned fourth in the standings.

Now 22 points down on series leader Justin Cooper (Monster Energy Star Yamaha Racing), the Monster Energy Pro Circuit Kawasaki rider is eager to move onto Glendale this weekend, where he’s hopeful the Triple Crown format will serve up an interesting night in the title chase.

“It was a tough one to take tonight after being in good position the whole race,” reflected Forkner, who escaped injury in the incident. “The track was changing a lot during the race, getting slippery and the whoops broke down a lot more than we expected.

“Moving forward, I know I will do everything in my power to make sure I’m getting maximum points and go after that red plate. Next week will be interesting with the Triple Crown, so we’ll see how that changes things up.”