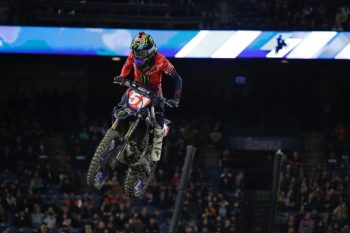 Barcia came into the third round of the championship with the coveted red plate and was looking to repeat his winning form at the Angel Stadium of Anaheim. He and his team spent the day working to overcome those obstacles and the Florida resident made strides forward in his Heat race to finish fourth. In the Main Event he didn’t make a strong start but charged forward from 12th to seventh in four laps. Barcia held that position until the halfway mark, but ultimately got shuffled back to ninth. With the main focus being the number-one plate rather than red plate, he managed his race to finish inside the top 10, just three points behind the championship leader.

Plessinger led the way for the team in qualifying and finished seventh in his Heat. The sophomore Supercross rider got the great start he was looking for in the Main Event and was right in the mix up front battling for third. Unfortunately, he ultimately got shuffled back through the pack. The 2018 250SX West Champion went down after contact with another rider battling for the top 10. Not willing to quit, Plessinger rejoined the race and advanced to finish 15th.

Next up is Round 4 of the Monster Energy AMA Supercross Championship at the State Farm Stadium in Glendale, Arizona on Saturday, January 25.