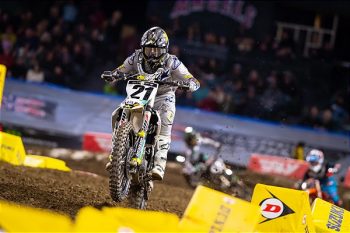 It was a good day for the Rockstar Energy Husqvarna Factory Racing Team as Zach Osborne and Jason Anderson finished just off the podium with a pair of solid top-five finishes in the premier 450SX class. Additionally, team rider Michael Mosiman secured fourth in the 250SX West division for Round 3 of the 2020 AMA Supercross World Championship Series in Anaheim, California.

450SX
It was a slow start to the day for Osborne, who struggled to find speed in qualifying and the heat race. He got a top-five start in 450SX Heat 2 but he got passed early on and settled into eighth before ultimately claiming the ninth and final transfer position. His momentum completely changed in the Main Event as he got off to a good start, rounding the opening lap in third. He shuffled back to sixth early on but he fought his way back into the top-five just after the halfway point and from there he charged up to fourth, finishing only 10 seconds behind the race leader.

“It was a pretty good night,” Osborne said. “I struggled all day to get in a good flow but I turned it around for the Main Event. I moved up in the points a little bit so we’ll just keep building and keep hammering and I think podiums and wins are coming, it just takes some time to find your race speed.”

Anderson, the fifth-place qualifier, started inside the top-five in 450SX Heat 2 and he battled his way into third early on. He maintained his position for the entire eight-lap race, securing a third-place transfer into the Main Event. He got off to a sixth-place start in the Main Event and quickly worked his way into third by lap five. While dicing back-and-forth with Cooper Webb, Anderson got pinched and was forced off the track, which allowed another rider to go by as he dropped back to fifth. He continued to battle for a top-five position, where he ultimately secured fifth for the night.

“My weekend went alright but I kind of was under the weather all day,” Anderson said. “I tried to make some stuff happen in the Main Event – I got up in third but ended up going backward to sixth and then back to fifth, so not too bad going into next weekend.”

Dean Wilson had a great start to the day as he secured a fourth-place position in qualifying. He kept the momentum rolling into 450SX Heat 1, where got off to a third place start and battled his way to a top-three finish. With a favorable gate choice for the Main Event, Wilson grabbed a top-10 start, sitting eighth after the opening lap. He continued to battle inside the top-10 for the remainder of the 24-lap race, where he ultimately claimed a top-10 finish.

“I would say today was an improvement,” Wilson said. “I just have to keep trying to get better every race. I definitely felt my fitness struggling at the end of the Main Event but overall I was actually pretty happy with my starts and how it went.”

250SX West
In 250SX West Heat 2, Mosiman got off to a great start as he pulled the holeshot and assumed the early lead. Sitting in second, Mosiman had an early crash that would ultimately send him to the last chance qualifier after missing the final transfer by only one spot. In the LCQ, Mosiman grabbed a second-place start and quickly powered his way into the lead on lap two. He maintained control of the race to ultimately secure the win and a spot in the Main Event. In the main, Mosiman made the most of his outside gate pick and powered his way to a top-10 start. From there, he worked his way through the pack as he sat within striking distance of the top five heading into the final laps. With two laps to go, Mosiman maintained his composure and capitalized on mistakes by other riders to make up two positions to ultimately finish fourth overall for the night.

“It was hectic and chaotic in the Main Event, it was like survival mode out there for most of us,” Mosiman said. “My starts were pretty good tonight but I don’t feel like I rode deserving of fourth. But I’ll take it and go onto the next round.”