Knocking on the door of 250SX West podium in early rounds of the season. 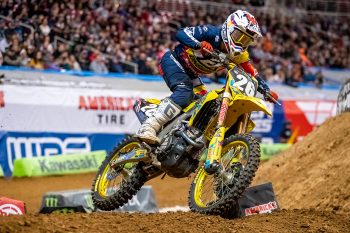 A close fourth-place finish in St. Louis for JGRMX Yoshimura Suzuki’s Alex Martin has added to his confidence entering round three of the 2020 Monster Energy Supercross season.

Martin marginally missed the podium by 0.245s behind Brandon Hartranft (TLD Red Bull KTM) last weekend, now with momentum on his side as the series returns to Anaheim.

It was a convincing ride for Martin aboard the factory-supported RM-Z250, starting inside the top five and then working his way forward during the 15-minute 250SX West main event.

“It was nice to be back racing in the Midwest as St. Louis is the closest race to home for me,” stated Martin, who was 10th at Anaheim 1’s opener. “We made small changes for the main that seemed to help.

“It was the best I felt and rode all day, ending up three tenths out of a podium position with fourth on the night. We’re [five] points out of third in the championship, so excited to keep the momentum going heading into Anaheim!”

Upon return to Angel Stadium this weekend, Martin is currently fifth in the 250SX West point-standings, within striking distance of the top three during these opening stages of the season.