Geico Honda rider records DNF after crashing out of second round. 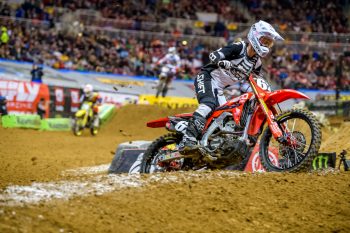 Geico Honda’s Christian Craig has declared himself fit for Anaheim 2 this weekend after suffering an injury scare at St. Louis on Saturday night.

Craig crashed in the late stages of the 250SX West main event, where he took significant time to return to his feet – later remounting and returning to the pits.

The popular Californian later revealed he took a handlebar to the abdomen, although no serious injuries came as a result of the incident.

“Despite the ending of the main event, I’m pretty pumped on my weekend,” Craig mentioned. “The heat race went really good. I passed into the lead quickly and was able to just ride my own race and win. Going into the main I felt the best I’ve felt in a while.

“I had a middle of the pack start and was able to make my way to about fourth in the first lap. Everything was going good, honestly, but with a couple laps to go as I was about to pass for third, I cross rutted and hit a tuff block.

“It was a pretty hard crash, I landed right on my ribs/lungs so I couldn’t breathe at all. Luckily I’m not injured any more than just being bruised up. I’ll be ready to go [next weekend] for A2.”

It was a bitter blow for Craig, who was forced to record a DNF after a promising podium result at Anaheim’s season-opener of Monster Energy Supercross. He’s now ranked ninth in the point-standings two rounds in.