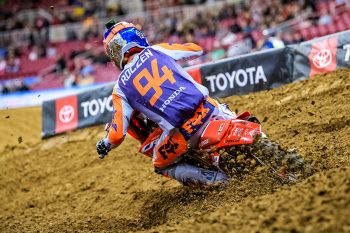 “You’ve gotta think about Ken Roczen and the emotions that were going through his head in the last few laps,” five-time Supercross champion Carmichael commented. “I would say, probably the last seven minutes, he’s like ‘hey, this is really going to happen’.

“We all were wondering when it was going to happen and he was probably wondering if… He got the job done tonight and I really think that this is going to ‘accel’ him – he’s going to continue to win.”

And that next victory could arrive as soon as this weekend at Anaheim 2 – the scene of his major crash three years ago – according to Carmichael: “I think next weekend at Anaheim, he wants redemption from that place.”

Roczen’s rise back onto the top step of the podium has been one of the most significant storylines in the sport, that win in St. Louis coming a full three years after his near career-ending crash at A2 in 2017.