Third in the final a significant reward for TLD Red Bull KTM entry. 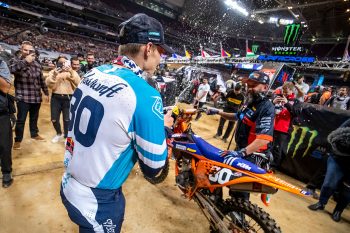 In his second appearance with the official KTM squad, Hartranft stood on the podium alongside Austin Forkner and Justin Cooper in a rewarding result.

A strong start saw Hartranft inside the top five throughout the main event and late difficulties for Geico Honda duo Christian Craig and Jett Lawrence saw him elevated into podium position – holding out Alex Martin (JGRMX Yoshimura Suzuki) to the flag.

“Honestly, I’m still in shock about what happened tonight and this podium couldn’t have come at a better time for me,” he beamed. “The team and I have put in a lot of work this off-season and I definitely couldn’t have done this without them!”

After scoring seventh and Anaheim 1 and then rising for the podium in St. Louis, Hartranft has moved to third in the Monster Energy Supercross 250SX standings after the opening two rounds.