Under the weather Barcia salvages runner-up in St. Louis 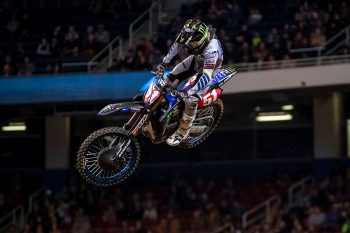 450SX points-leader Justin Barcia salvaged a runner-up finish at round two of Monster Energy Supercross in St. Louis, the opening round winner battling an illness as he strengthened his advantage.

The New York native was able to push through the night show, finishing third in his heat before putting on a heroic ride to second in the 24-lap main event.

“It was a pretty tough day for me,” Barcia admitted. “I was really sick all week and I just had to be mentally tough and push through the difficulties I was having today. My heat race went really well. I got a bad start, but I fought through the pack and got up to third. I made some really great passes, so that was awesome.

“In the main event I got a much better start and quickly moved into second. I was pushing really hard, but tonight the best I had was second – I rode really well, considering, and I felt like I rode better today than I did in Anaheim.

“I just unfortunately was a little under the weather. So, all in all, a really good day. The team did a great job with the motorcycle and setting it up and now I’m really looking to get better this week and feeling better for Anaheim.”

The Monster Energy Supercross series returns to Angel Stadium in Anaheim this weekend for round three of the 17-stop series, where Barcia will maintain the red plates with a lead of six points.