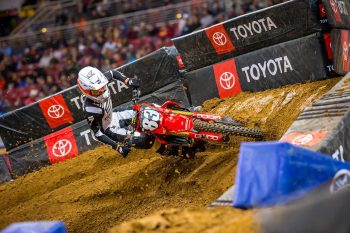 A night of extreme promise for the GEICO Honda team included all the right ingredients except the actual finish, as late mistakes cost Christian Craig and Jett Lawrence potential podium finishes at The Dome at America’s Center.

At the second round of the 2020 AMA Supercross Championship, the rookie Lawrence turned a lot of heads by running second for 11 laps, staying within striking distance of the lead in just his second supercross race. A bobble led to a bent rear brake pedal and a visit to the mechanic’s area, ultimately pushing him down to fifth at the finish.

Lawrence’s error opened the door for Craig to move into podium position. Craig had already captured a heat race win earlier in the evening. Unfortunately, he crashed out of the main event moments later when he landed on a tough block lining the side of the track. Craig was shaken up in the spill but was eventually able to ride off to the pits under his own power, banged up but not seriously injured.

“Despite the ending of the main event, I’m pretty pumped on my weekend,” said Craig, who had finished third in the season-opening round a week earlier in California. “The heat race went really good. I passed into the lead quickly and was able to just ride my own race and win. Going into the main I felt the best I’ve felt in awhile. I had a middle of the pack start and was able to make my way to about fourth in the first lap. Everything was going good honestly but with a couple laps to go as I was about to pass for third, I cross rutted and hit a tuff block. It was a pretty hard crash, I landed right on my ribs/lungs so I couldn’t breathe at all. Luckily I’m not injured any more than just being bruised up. I’ll be ready to go [next weekend] for A2!”

The season-opener at Anaheim marked the first U.S. pro supercross of Jett Lawrence’s career, and despite dealing with food poisoning, he finished ninth. In his qualifying heat race on Saturday, Lawrence crashed into another rider and was just able to claw back into a transfer position. His main event was much better.

“Weekend was up and down,” said the 16-year-old Australian. “Qualified good with fifth fastest, but the heat race was a complete disaster ride like a complete rookie! Thankfully I pulled it together somewhat in the main. I rode a good race and was ready to challenge for the win with three mins left in the main before I clipped a tough block which damaged my rear brake and locked it on forcing me to come in to the pits. Kind of a bummer to have that happen, but it’s okay because I learnt a lot and am ready to battle at the front this weekend in Anaheim!”