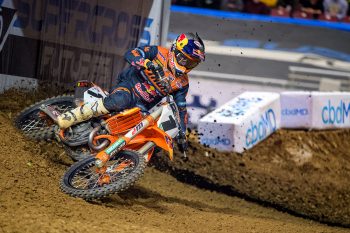 Red Bull KTM’s Cooper Webb admits he struggled to get comfortable at St. Louis’ second round of Monster Energy Supercross, declaring he just wasn’t ‘able to make it happen’ as he continues to fight sickness.

The defending 450SX champion continued to battle an illness that struck him down at Anaheim 1, where he landed on the podium in third, but still isn’t 100 percent fit.

Webb evidently battled to come to grips with the Missouri circuit, earning a P4 result in his heat before being unable to recover from a poor start in the main, finishing out the 24-lap encounter in 12th.

“Tonight definitely didn’t end up how I had wanted it to,” Webb commented. “I struggled all day to get comfortable and, unfortunately, I was just not able to make it happen tonight. We are going to regroup, work on getting healthy and hopefully get back up on the podium next weekend in Anaheim.”

The Monster Energy Supercross series heads back to California next Saturday at Angel Stadium in Anaheim for round three, with Webb now ranked seventh in the championship standings.