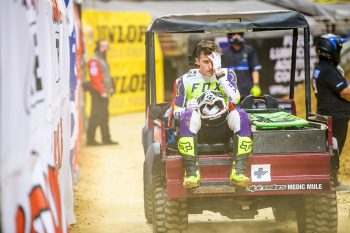 A crash in the opening practice session during St. Louis’ second round of Monster Energy Supercross resulted in a collapsed right lung and partially collapsed left lung for 250SX West contender Cameron McAdoo.

The Monster Energy Pro Circuit Kawasaki rider crashed at the beginning of a rhythm section in free practice. He later returned for the second session, however it called for the end of his campaign in Missouri.

A further medical examination at a local hospital determined the extent of his injuries, which could potentially sideline him for a number of weeks.

“Man, what a tough day,” McAdoo commented. “It’s always a difficult pill to swallow when you end your day early, especially when you’re riding well and feeling good in the beginning. I made a small mistake in qualifying and just couldn’t really recover after that crash.

“I was hurting pretty badly, so the team and I all made the decision to call it a day and get checked out in hopes to recover quicker for the long season ahead.”