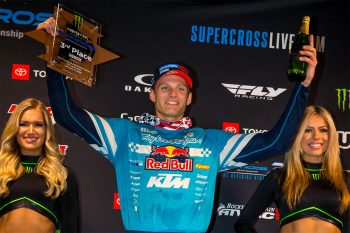 It was an exciting night for Brandon Hartranft and the Troy Lee Designs/Red Bull KTM Factory Racing Team as the 250SX West rider earned his first-career podium finish on Saturday night with an impressive third-place at Round 2 of the 2020 AMA Supercross Championship in St. Louis, Missouri.

Things didn’t quite go to plan for reigning 450SX Champion Cooper Webb, who came into the weekend still fighting a lingering illness from the previous round. After qualifying in 14th, Webb lined up in 450SX Heat 1, where he got off to a fourth-place start aboard the KTM 450 SX-F FACTORY EDITION. He rode a solid pace throughout the heat to ultimately secure a fourth-place transfer into the Main Event. In the Main, Webb didn’t get the best start as he rounded the opening lap in 15th. Despite being under the weather, he dug deep and charged ahead to ultimately salvage 12th for the night.

Cooper Webb: “Tonight definitely didn’t end up how I had wanted it to. I struggled all day to get comfortable and unfortunately, I was just not able to make it happen tonight. We are going to regroup, work on getting healthy and hopefully get back up on the podium next weekend in Anaheim.”

Webb’s teammate, Marvin Musquin, will miss the entire 2020 AMA Supercross Championship due to a leg injury sustained during the off-season. Musquin recently underwent surgery to repair his left knee and he is now concentrating on intense therapy to heal over the next few months.

In the 250SX Western Regional division, Troy Lee Designs/Red Bull KTM Factory Racing’s Brandon Hartranft powered his KTM 250 SX-F to a top three start in the Main Event, where he set himself up in a favorable top-five position early on. He moved into podium contention with five laps to go and he held strong in the final laps to ultimately secure a career-best finish of third.

Brandon Hartranft: “Honestly, I’m still in shock about what happened tonight, this podium couldn’t have come at a better time for me. The team and I have put in a lot of work this off-season and I definitely couldn’t have done this without them!”