Penrite Honda take seventh and eighth in round two of Supercross 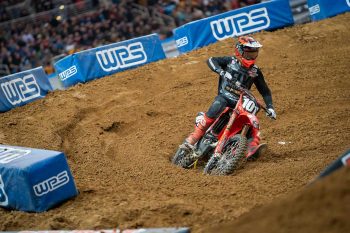 It was a much improved weekend for Penrite Honda Racing at the second round of the Monster Energy AMA Supercross, held at the Dome at America’s Centre, in St Louis.

The team stayed within the top 10 in qualifying, with Mitchell Oldenburg 7th and Luke Clout in 10th. This resulted in the boost in confidence they needed heading into the Heat race.

“Qualifying proved the work we did during the week was in the right direction” said Team owner, Yarrive Konsky.

When the gates dropped in the heat races, both of the riders came out swinging. Clout was hungry for redemption. He got a great start and stayed in 3rd for most of the race. Justin Cooper passed him with a lap to go which relegated him to 4th.

“I felt more like myself tonight. Finishing 4th in the Heat was great and it’s much closer to where I want to be. I am getting more comfortable on the 250 as well” said Clout.

Oldenburg kept a very solid pace during his heat, taking a convincing 2nd.

“My heat was good, even though I am still riding injured. Last weekend I hit the ground a lot and am still very banged up and sore. I only managed to ride once this week so I am really happy with my result in the heat race” Oldenburg said.

The Main race was stacked with the best 250 West Coast riders in the world. Oldenburg’s start put him in 4th. Unfortunately a small crash mid-race saw him drop back in the pack. After picking himself up he charged forward and ultimately took 8th overall.

“St Louis was a decent night, considering last weekend and the week I have had. I’ll take an 8th! Dr G helped me out a lot this week and got me comfortable, got my body working as best as it could. The little tip over in the main was unfortunate but I put my head down and charged as hard as I could and came away with 8th so I can’t complain.” Oldenburg said.

Clout didn’t get the start he had hoped for and he had to push hard to get up to the front. He rode consistently and kept his head down, taking 7th overall for the night.

“Coming away inside the top 10 is what I wanted so I’m pretty happy with 7th. We are heading in the right direction and the weekend has been great. Now I’m looking forward to racing at Anaheim again next week. The bike is good, the team is working hard to make sure we have every chance to be up the front, so hopefully I can keep on improving each week.” Clout said.

Team owner Yarrive Konsky was pleased with the night’s results, noting it’s a lot closer to where I believe our riders are capable of finishing.

“Both riders showed better speed. We need to focus on keeping the intense pace throughout the final and staying consistent. Mitchell is sore but he’s still putting in which was awesome to witness, he is not a quitter. Luke gets more and more comfortable every time he rides and races. The support we are receiving from fans and the industry is overwhelming. To race in America
and be competitive takes a process and we need to patient. I am still learning each and every weekend. As a team we will learn, we will put our processes to practice and we will move forward. We have set some goals for next weekend and we will strategically work on them. The bikes, riders and team will continue to evolve” Konsky concluded.