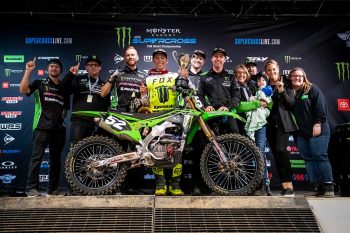 Monster Energy Pro Circuit Kawasaki’s Austin Forkner proved he was back and capable of winning with a dominating performance in front of his home state inside The Dome at America’s Center, earning his second straight main event holeshot and taking the wire-to-wire win.

Teammate Cameron McAdoo posted fast times in practice, but after going down in the second timed qualifying session it was decided that he should sit out for the night to focus on returning next weekend.

Forkner had a chip on his shoulder coming into the second round after he was forced to relinquish his podium last week due to a mistake on the track. As Team Owner Mitch Payton pointed out, Forkner was shaking off some rust but showed improvements every time he was on the track.

With a race under his belt, Forkner was determined to prove he was ready to get back to the top and did so by winning his heat race, then going on to grab the main event holeshot and leading all 18 laps. He moved into second in the championship standings, five points back from the leader.

“I am really happy to get back up here (on the podium),” said Forkner. “I started to ride tight halfway after I got to think about it. It’s been a long time coming with physically healing from the knee and mentally getting back knowing I can win. I could hear the fans and they pushed me through. I love being able to win in front of my home crowd.”