Roczen breaks through in St. Louis with 450SX victory

German stands atop the Supercross podium for first time in three years. 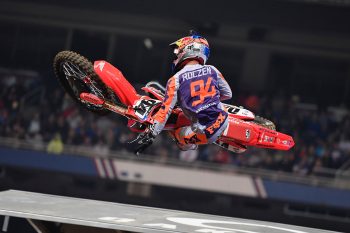 Roczen worked his way into the lead on lap two and was never headed, putting forward a commanding performance to win by 4.794s in the main event.

It was Zach Osborne (Rockstar Energy Husqvarna) who initially led, before Roczen stormed to the front and extended his advantage from there. Behind him, Anaheim winner Justin Barcia (Monster Energy Yamaha) did enough to maintain the points-lead in second position.

Cianciarulo was in the frame for another top five until he went down and lost positions in the closing stages, but did score a first-career 450SX heat race win earlier on tonight.

Second tonight enabled Barcia to extend his advantage in the championship to six points now ahead of Roczen, with Anderson’s podium elevating him to third overall entering Anaheim 2 next Saturday, 18 January.