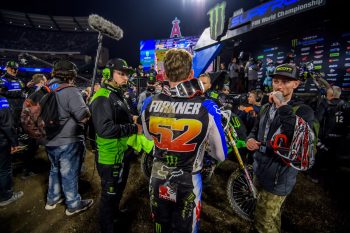 Monster Energy Pro Circuit Kawasaki is moving on from Austin Forkner’s post-race penalty at Anaheim’s Monster Energy Supercross opener, where the 250SX West title contender was demoted from the podium.

Forkner made an error while leading the field, positioning him awkwardly in the middle of the rhythm section and prompting him to cut a portion of the track as a result.

The number 52 celebrated third on the podium while the incident was under investigation, where he was later docked two positions for fifth on the night.

“We got the first race out of the way, which always tells us where we are at against the rest of the field,” said the team’s R&D manager Zach White.

“Obviously, we aren’t happy with the outcome but we are healthy. It was a very technical track and sometimes the biggest task is to walk away healthy from the first round. We’re ready for St. Louis.”

The Missouri native believed he took the appropriate action, although he’s now put the sanction behind him ahead of his home race at St. Louis this Saturday night.

“It was a split-second decision to be as safe as possible,” said Forkner. “That’s what they always tell us to rejoin safely and with me pointed backward and slightly left, I thought that after the next rider went by I would be fine.

“I didn’t gain any position by doing what I did. It’s a bummer they (the officials) didn’t feel the same way. After knowing I was able to put a good pace out front, I’m more fired up than ever to get back out there next weekend.”