It was an incredible night for Justin Barcia at Anaheim 1 as he opened his Monster Energy Supercross title bid with a thrilling victory, the Monster Energy Yamaha rider overcoming an early scare to secure top honours. In this edition of Debrief, Barcia recounts his triumph with questions from the post-race press conference. 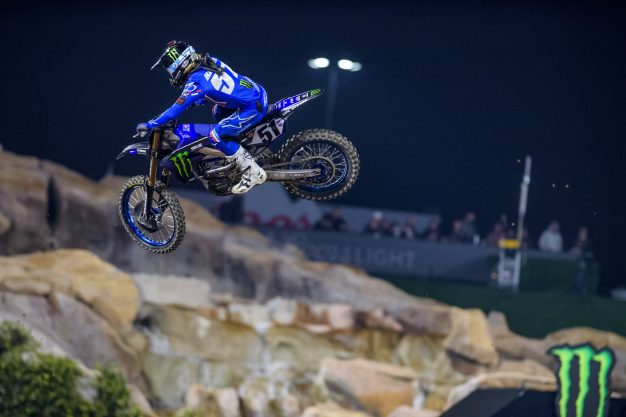 You won this race a year ago, and you were really adamant about not letting the highs get too high. You’re back on top again, it just took a whole year to win again.

It’s cool. I’ll be honest, last year I wasn’t comfortable on the bike at all, so that was a huge shock. I’m not saying I came here to win this race – I wanted to be up there and be consistent. My main goal is obviously the championship and I want to be in the hunt all year. Where my motorcycle is at at the moment, I can do that. Last year, physically and mentally, I won this race, but it wasn’t my year. I think where I’m at now, I’m in a really good place. Once I got into second, I was like this is alright and I’ll keep plugging away. AC made that mistake, and it fell into my hands a bit – I’ll take it for sure. I’m just excited, grateful and happy – all of the above.

There’s been a lot of talk coming into this season on how you’ve made bike changes – you started over and built the bike around you. One of the things people have talked about is that you went back to riding your way, which is more aggressive and you let it out. Were they the changes you needed to feel comfortable again?

Thank goodness, it was a big off-season and a lot of work – there are a lot of new employees at Yamaha and it was very positive to see they knew they weren’t in a good place. Cooper [Webb] left, and we’ve seen what Cooper did. We went back to the drawing board and changed a lot of things this year, and we still have a lot of work to do obviously. We reset big time – we have Sergio over there now – he’s been around forever and has worked with James Stewart, Ryan Villopoto – you name it, he’s worked with them. So he and I bonded really well. We don’t have a test rider, so I did all the work myself – I’ve never ridden so much in my life, but I really enjoyed it. It showed – everything I did, it worked tonight. I rode a lot of different tracks and raced in Europe – the bike worked pretty good everywhere. I was nervous coming into here because I didn’t know what the bike was going to be like – I liked it pretty much everywhere I rode, so yeah, it was good here. It’s exciting, and good things are to come, for sure. 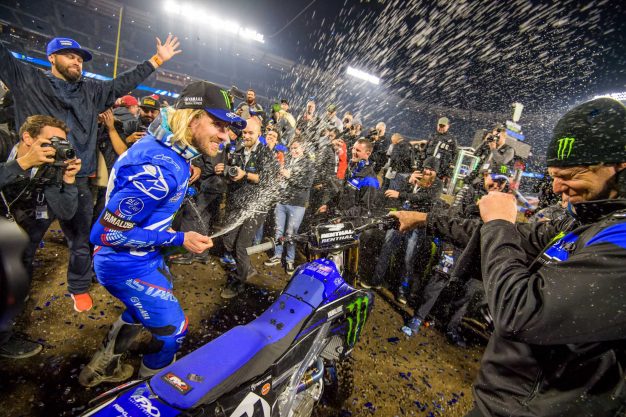 Being a test rider – you being that guy – are there things you’ve learned in the past few months that you didn’t know before about a bike? Learning how to craft things towards your liking.

Yeah, for sure. We don’t get factory parts from Japan – that’s just not really a thing anymore, at least for Yamaha. We do a lot of in-house things, and for me, the bike is a pretty standard chassis set-up and I’m running stock triple-clamps. The engine – I requested a lot of things last year, and it didn’t happen. This year, when Sergio came in, the things I requested he agreed with me, and it was cool to see that – we got the things I asked for this year, and that was a good feeling that the things I asked for work for me – it was cool to see that and it made me happy. I think it helps a lot – I’m becoming a better rider all-round, I’ve learned a lot things about the motorcycle and I feel I’ve matured a lot and I’m a lot smarter. It’s a good feeling to do your own work.

I definitely went back to the drawing board before the season – I won Anaheim last year, but it was a mud race – I think any motorcycle can do a mud race, and I’m a mud rider, so that was cool. But then after that, it was a rocky road to ride, for sure. The bike is a big help, and like I said, I went back to the drawing board – my friend Levi Kilbarger – we used to train together back in the day on 250s – and I brought him out to California and we worked on things. You can hire a trainer, but you don’t always listen to them – I’ve had a lot of trainers, and something has never really clicked. The best one I had was Jeff Stanton, I enjoyed working with him. To bring a friend in that knows what they’re talking about – and he shoots it straight – he’ll tell me if I suck or if I don’t. I feel like people these days just want a check and they’ll sugarcoat it, so it was cool to have him on board. It was awesome today [with] starts – I haven’t gotten good starts in forever, so it was cool to all the hard work I put into starts, and also my riding on the track was good. It was a little bit of riding, and the bike as well.

Usually when we see two riders go after each other and go back and forth on track, it’s usually one guy getting the other in a corner, the other driving out in the whoops. You guys looked like the battle of who’s going to make the mistake – Barcia, you had that little slip and AC goes by, and then AC makes the slip. Is that more of a mental game than a physical game?

Yeah, were pushing it pretty hard. My mistake was huge, not little. I landed on the top of the tuff-blocks, luckily didn’t crash, pulled off to the side of the track, squirrelled out, and got back on. When I got behind AC, I just tried to be smart and would reel him in if I could – I saw he made a mistake and I saw the opportunity and jumped in there. I think we were pushing it pretty hard.