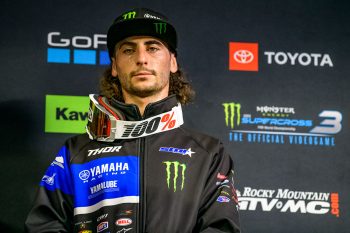 The Frenchman, who is using the 1W plate in 2020 Monster Energy Supercross, rebounded from seventh position on the opening lap to press on for a second-place finish.

It was still a solid result for last year’s title-winner, however, matching his runner-up result from one year ago. Ferrandis said it was a case of fighting through the pack and also riding somewhat tight at the opener.

“Bad start again and then I saw the guys in front, tried to hurry up a little bit too much and made some small mistakes stuck in traffic,” Ferrandis commented afterwards. “I lost a little bit of time, so after I was third I pushed and pushed.

“Today I just rode a little bit tight in the main, I think just because it’s the first round of the season at A1 and a lot of pressure. I am a little bit disappointed, not because of the result, but more my riding because I should ride better.

“Second – like last year – is a disappointing for me, but last year we started like this and finished with the championship. We have nine races to go, so we’ll see, everything is alright and I’ll have to take the win next weekend.”

Ferrandis started the round by being fastest overall at the conclusion of final 250SX West qualifying, then won heat two prior to finishing second behind teammate Justin Cooper in the main event.