Adjustments to be made at Team Honda HRC prior to St. Louis. 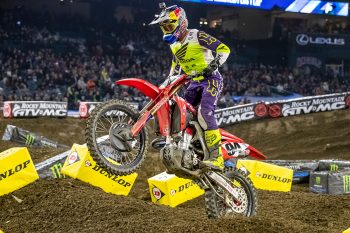 Team Honda HRC’s Ken Roczen has revealed the settings on his factory CRF450R were too stiff for the track conditions at Anaheim 1, especially affecting him in the main event.

Roczen knew entering the weekend that he had opted for a stiff bike setting, however, as the track deteriorated into the evening it became apparent a softer set-up was required.

Despite those difficulties and after finishing second in his heat race behind teammate Justin Brayton, Roczen rode to sixth in the 450SX final to salvage a decent bunch of points at the opening round.

“Anaheim 1 started pretty good, but the main event was definitely not the greatest,” Roczen confirmed. “We were a little off on our bike set-up, with it being way too stiff. That really showed in the main because of the way the track deteriorated so much.

“I didn’t feel like I was able to keep a good flow or attack the track the way I needed to. For sure, this is not the position we wanted for the night, but it’s good to get the first race out of the way and leave healthy.

“We know what we need to work on for the upcoming race and have a plan in mind moving forward to implement those changes. Overall we’re not going to let this first race get us down and I’m looking forward to St. Louis.”

The 2020 Monster Energy Supercross season moves directly across to St. Louis, Missouri, for round two of the season this Saturday night, where Roczen is expected to refine the setting with Honda and move forward.